India, BD decide to release biopic on Bangabandhu in next March Live Desk: India and Bangladesh will release biopic on Bangabandhu Sheikh Mujibur Rahman in the next March. The decision came at a meeting between Information and Broadcasting Minister Dr Hasan Mahmud and his Indian counterpart Anurag Thakur in New Delhi on Tuesday.

They also decided to celebrate “Maitree Diwas” on December 6, the day in 1971 India formally recognised Bangladesh. The cultural teams of both countries will perform in Dhaka and New Delhi marking celebration of the day.

"The biopic Bangabandhu is almost 75 per cent complete and we talked about completing it sooner. The shooting will be in Bangladesh for the rest of the part. We will try to complete it by March," said Thakur after the meeting held at his Akbar Road residence. 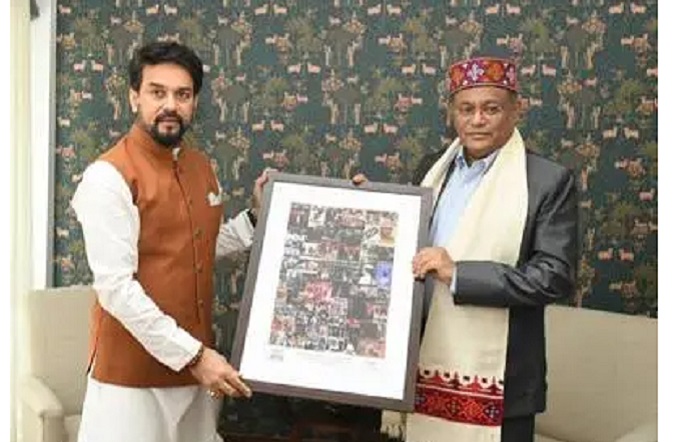 About ties between two next-door neighbours, he said, "My meeting with my counterpart was a fruitful one on improving ties between both countries. Prime Minister Narendra Modi also travelled to Bangladesh. Such meetings will further strengthen ties between the two countries."

"On 50th year of International Film Festival of India (IFFI), focus country was Bangladesh. People like movies from Bangladesh and how Indian movies can be shown more in their countries will be our focus. We are trying to better our relations in the field of movies, audiovisual technology, virtual effects and gaming and other technology sectors," he opined.

Speaking on the occasion, Mahmud termed the initiative a tool for strengthening the Indo-Bangladesh relationship.

He said bilateral relations between both countries have reached a new height under the leadership of Prime Minister Narendra Modi and Prime Minister Sheikh Hasina.

Remembering the contribution of Bangabandhu, Mahmud said, Sheikh Mujibur Rahman sacrificed his life for the freedom and the people of Bangladesh.

He thanked India for playing a critical role in the liberation efforts of Bangladesh saying that it had not been possible to liberate Bangladesh without the help of India.

In tweeted message, Anurag Thakur  termed his picture with Bangladesh counterpart to be the best photo of the day.

Talking to journalists at Bangladesh High Commission in New Delhi, Hasan Mahmud said he proposed his Indian counterpart to take step to ease visa and other proceedings for visit of cultural groups of both countries.

"Glad to meet Bangladesh Information and Broadcasting Minister, Hasan Mahmud. Our bilateral cooperation is progressing steadily across all domains. Discussed media and public perceptions in that regard," Jaishankar tweeted.

Like Europe, the people of South Asian countries may have a facility to make visa-free visit and movement, he said.

In the evening, Dr Hasan Mahmud attended unveiling of a book on Bangladesh Liberation War in 1971 written by late Akashvani journalist UL Baruah.

Bangladesh Jatiya Press Club and Press Club of India singed a MoU to celebrate birth centenary of Bangabandhu, 50 years of Bangladesh-India relations and golden jubilee of independence together. The members of both press clubs will make visit to each others’ country under the deal.