Sports Live: Reigning champions Khulna Division made a winning start in the 22nd edition of the National Cricket League as they beat Sylhet Division by eight wickets on the final day of their tier-1 first-round match at Sheikh Abu Naser Stadium in Khulna on Thursday.

Sylhet could add only 58 runs to their overnight score of 250-5 before they bowled out for 308 runs in their second innings to set Khulna a target of 68 runs.

Man-of-the-match Zakir Hasan made the highest 140 runs for Sylhet while Abdul Halim and Moinul Islam took four and three wickets respectively for Khulna.

Khulna chased down the target in just 9.3 overs as they reached 73-2 with opener Imran Uzzaman made unbeaten 33 runs.

Sylhet earlier had to make an adjustment to their playing XI before the fourth day’s play got underway after their pacer Ebadot Hossain complained of illness and Rejaur Rahman Raja batted and bowled for him in their second innings as a like-for-like replacement.

“Ebadot had fever and doctors suggested him to take a rest. So Raja (Rejaur Rahman) came in his place in this match,” Sylhet team manager Faridul Hussain Qureshi told The Daily Sun.

“According to a rule of the NCL, if a player gets sick during the match or outside the field, the match can allow a replacement,” he added.

Rejaur made 14 runs with the bat while also picked a wicket in Khulna’s second innings.

Left-arm spinner Nazmul Islam claimed 6-64 in the second innings to finish with the career-best match bowling figure of 10-153 to help Dhaka Division earn an 80-run win over Rangpur Division in their other tier-1 match at the BKSP.

Resuming on 35-2, Rangpur were bowled out for 183 runs in their second innings while chasing a target of 264 runs.

Dhaka earlier made 365 and 128 runs respectively while Rangpur could score 230 runs in their first innings. 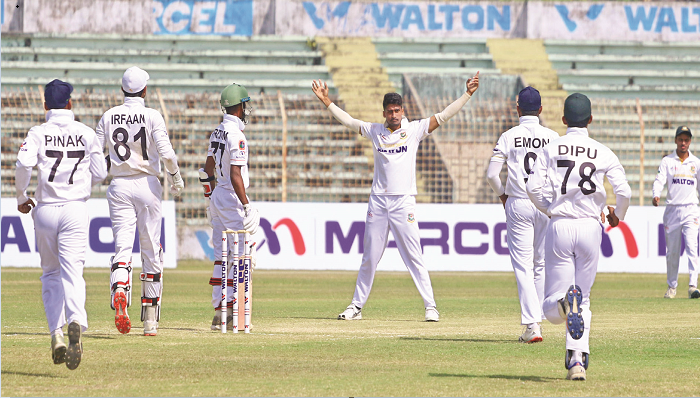 In Rajshahi, Rajshahi were bowled out for 194 runs in their second innings to concede a defeat by 88 runs against Chattogram in a tier-2 match after resuming on 147-5. Junaid Siddique remained not out on 68 for Rajshahi.

Chattogram pacer Mehedi Hasan Rana took four wickets to finish the game with seven wickets and a fifty in the first innings and was named player of the match.

Rajshahi earlier made 152 runs in their first innings while Chattogram scored 287 and 147 runs respectively in their innings.

Dhaka Metro registered an easy eight-wicket victory over Barishal Division after bowling them all out for 208 runs in the second innings in Barishal.

Barishal, who resumed on 177-7, earlier made 241 runs in their first innings, replying to Metro’s first innings total of 413 runs.

Metro lost two wickets but it hardly put them under any pressure as they reached the target 37-2 in the 12th over of their second innings.